Reframing My Thoughts: Are Frameworks and Philosophies Merely “Slow to React”?

Before I venture further into my inquiry, specifically the “maker movement” and the MakEY Project, I would like to take a moment to reframe and reconsider my thinking thus far.  I took a moment to step back, read, and leave room for learning. I discovered that perhaps I needed to look at why, rather than how, digital technology is being addressed by both the BC Early Learning Frameworks and the Reggio Emilia approach to Early Learning.

The first article that altered my focus came in the form of an occasional paper on digital media and learning by Jenkins, Purushotma, Weigel, Clinton, and Robison (2006), entitled Confronting the Challenges of Participatory Culture: Media Education for the 21st Century. I drew an immediate connection from the following excerpt to the frameworks and philosophy I had examined prior:

“Schools as institutions have been slow to react to the emergence of this new participatory culture […] programs must devote more attention to fostering what we call the new media literacies:” -Jenkins et al., 2009

Jenkins et al. (2006) pointed to a growing body of research that suggested that the various forms of participatory culture undertaken by young people outside of school have the potential to generate: “opportunities for peer-to-peer learning, a changed attitude toward intellectual property, the diversification of cultural expression, the development of skills valued in the modern workplace, and a[n…] empowered conception of citizenship” (Jenkins et al., 2006). They also highlighted the fact that many scholars believed that children and youth developed such skills regardless of pedagogical interventions. However, Jenkins et al. believed that three concerns denoted the nescesity for curriculums focused on helping students develop the skills needed to fully participate in, and contribute to, online communities. The three concerns were:

Consequently, a central focus of their work aimed to draw attention away from considerations regarding technological access towards opportunities in teaching and learning associated with participating in a digital realm (Jenkins et al, 2006). Unlike the BC Early Learning Curriculums, the primary recommendation by Jenkins et al. (2006) was that an effective pedagogical strategy be developed specifically for media education. However, while reading the report presented by Jenkins et al. (2006), I couldn’t help but notice how many of the New Media Literacies naturally flow into the expectations for deep learning explicated in BC’s New Curriculum (2019) and are instinctively touched on in an approach such as Reggio Emilia.

Similarly, the Reggio Emilia approach to Early Learning aims to engage children in rich learning experiences. Reggio invites children to engage in an area of learning holistically: by offering many different modes, presenting an assortment of tools and mediums, incorporating various locations and perspectives, by avoiding timelines, and by actively listening. However, unlike BC’s New Curriculum, Reggio Emilia centres follow an emergent curriculum. Though there may be a shared “intent” amongst several centres, “hypotheses” (focus of learning) are generally constructed by a community of learners based on observations of the needs, skills, values, interests, and challenges of a specific group of children. Below is the Reggio inspired curriculum pathway we follow at our centres: 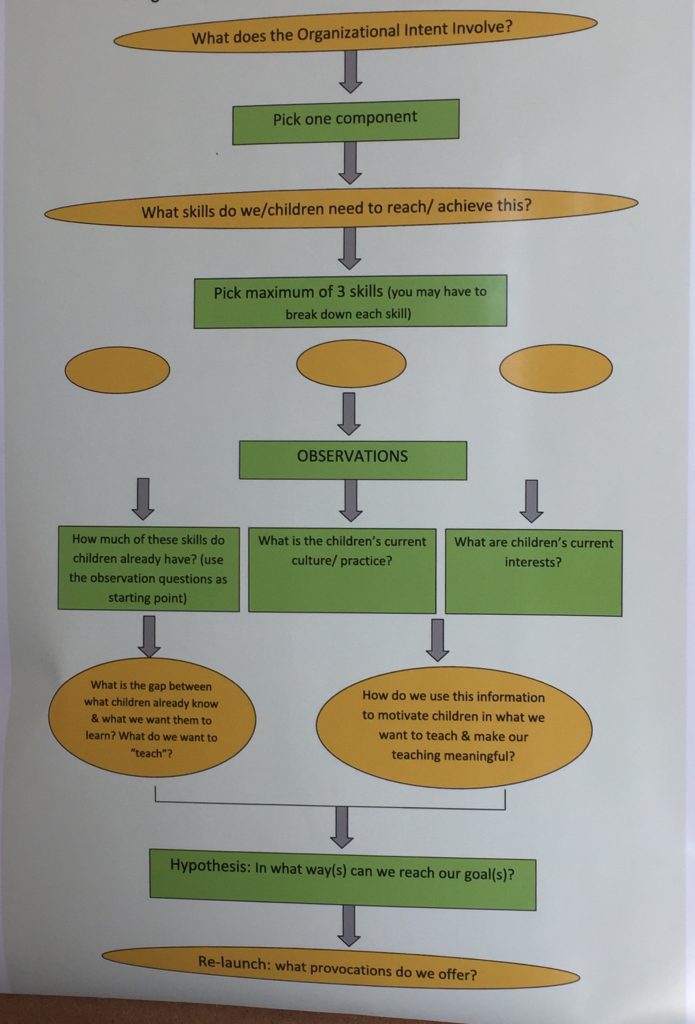 In my previous post, I voiced the opinion that digital technology often rests on the periphery of the deep learning that takes place within the Reggio Emilia approach. However, as Apler (2011) suggests in her work, Developmentally appropriate New Media Literacies: Supporting cultural competencies and social skills in early childhood education, several of the New Media Literacies described by Jenkins et al. are already “reflected in the interplay between digital and non-digital media within Reggio Emilia-inspired teaching and learning” (Alper, 2011). In addition, if digital literacy happened to be a core component of an “intent” or “hypothesis” within a Reggio program, it would be approached with an aim to generate digital fluency.

Again, similarly, if BC educators regard digital literacy as pivotal knowledge for their learners than their learners should be thinking creatively and critically with and about it, they should be connecting, engaging, and collaborating with their peers through and with it, and they should be considering their personal well-being and the well beings of others with and in connection with it. However, as I highlighted in my post BC’s Stance on Digital Technology in Early Years Education digital technology is not explicitly outlined as an area of learning in either BC’s Early Learning Framework or in BC’s New Curriculum (K-5).

Therefore, perhaps BC’s Curricula and the Reggio Emilia approach are not so dissimilar with regard to their position on digital technology. Possibly, institutions within both locations are simply “slow to react to the emergence of this new participatory culture” (Jenkins et al., 2006). It seems clear that neither BC, nor Reggio Emilia, Italy consider digital literacy imperative for their young learners.

However, BC educator, Alison Galloway, also recognized the similarities between BC and Reggio Emilia, Italy, specifically with regard to BC’s movement towards a more child-centred approach to learning (Galloway, 2015). Drawing inspiration from the Reggio Emilia approach, BC’s education plan, and the “maker movement”, Galloway (2015) created a learning environment capable of generating rich teaching and learning experiences connected to digital technology.

In addition, in her MEd Project entitled Bringing a Reggio Emilia inspired approach up the grades- Links to 21st century learning skills and the maker movement, Galloway (2015) critically examined many of the same aspects of education as Jenkins et al. (2006). Galloway advocated for education that focuses on competency and values students’ voice and choice (Galloway, 2015), while Jenkins et al. promoted education that treats young people as citizens deserving of the skills necessary to become valued as such (Jenkins et al., 2006). Galloway wrote:

“If, as educators, we want children to be inventive and resourceful, we need to provide opportunities for open-ended learning that challenges students to come up with their own questions and solutions.” – Galloway, 2015

Still, Galloway’s (2015) research did not specifically focus on digital literacy, rather it outlined the potential value for teaching and learning generated within a Reggio Emilia inspired “Makerspace”.

It is my intent, however, to highlight the fact that the literature I have encountered with regard to the “maker movement” explicitly highlights the value of the approach in contributing to digital fluency or “critical literacy”.

Galloway, A. (2015). Bringing a reggio emilia inspired approach into higher grades- Links to 21st century learning skills and the maker movement. MEd Projects (Curriculum and Instruction): University of Victoria, BC.