Digital vs. Analog. In Person vs. Online. Inconceivable in Application or in Education?

Pondering over ideas presented in the video, I couldn’t help but draw a connection between my initial feelings of cluelessness in EDCI: Multimedia Learning and Technology and the basic, outdated, and often limiting version of digital technology present in my Early Learning environments. I started to wonder: Perhaps I am not well versed enough in the capabilities of modern digital technology to be including it in my pedagogy? However, after more carefully considering some of the statements made in the video and reading a critical review of the (SAMR) model by Hamilton, Rosenberg, and Akcaoglu (2016), my feelings about my personal practice tranformed into critical notions regarding Puentedura’s model.

The critical review  presented by Hamilton et al. (2016) broke down Puentedura’s (SAMR) model into what they considered to be three challenges: (1) Absence of Context, (2) Rigid Structure, and (3) Product Over Process. However, the common criticism presented throughout their review suggested that the (SAMR) model undercuts the complexity in teaching and learning (Hamiliton et al., 2016). According to Hamilton et al., (SAMR) disregarded the complexity present in the learning settings within which technology is introduced, overlooked the variance in pedagogies by confining technology integration to four specific categories, and excluded the intricacies connected to the process of learning about technology by placing significant importance on the type of technology that is used (Hamilton et al., 2016).

While I agree that the (SAMR) model, in general, oversimplifies the process of technology integration in education, I found the steps of the (SAMR) ladder [model below] especially misleading. 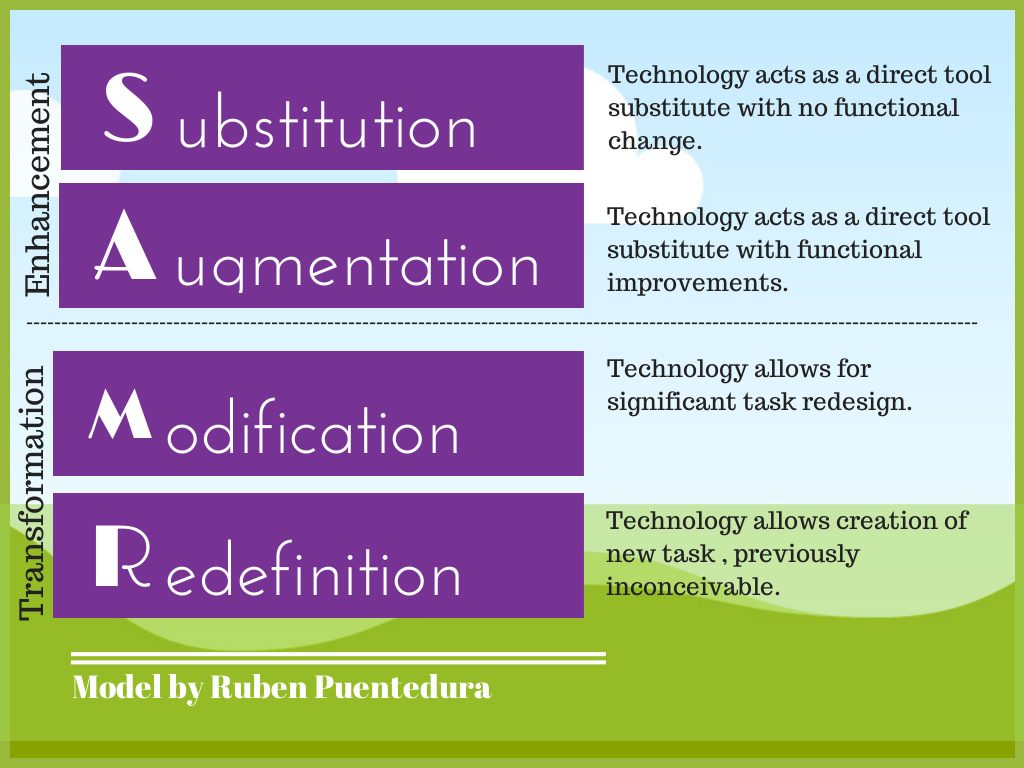 In their critical review, Hamiliton et al. (2016) highlighted the fact that the (SAMR) steps oppose research that suggested that enhanced learning outcomes were more dependent on teacher and student interaction rather than the type of technology used.  The (SAMR) model assumes that using technology in “redefined” or “modified” ways will generated improved learning outcomes. However, research suggests that classroom practices and teacher pedagogy play a more significant role in the level of learning comprehension (Hamiliton et al., 2016).

I also find the language used in the description of the (SAMR) steps misleading. The notion that specific digital technology can allow for “significant task redesign” or the “creation of a new, previously inconceivable task” is entirely subjective. The following examples can all be understood as subsitutions with “no functional change”: an in-class drama exchanged for a digital video recording, in-class discussions and peer editing switched out for a Google Doc, or small writing groups replaced by individual Blogs. Instead, one might consider an interactive, 3D computer simulation substituted in for a 2D diagram as redesigning educators roles in teaching rather than transforming student tasks.

Like much of what I have read about digital technology in Early Years education so far, the (SAMR) model focuses on how to best incorporate digital technology in one’s current educational practice or how to best use it in said practice, rather than ‘why’ use it at all. There appears to be an absence of literature, and examples from pedagogy (including my own), that explores teaching and learning technology holistically.

In my next few posts I will examine technology in my own classroom, the Maker Movement, more European pedogogies, and Henry Jenkins’ approach to “New Media Education”, in the hopes of better understanding how to educate on, rather than incorporate in, digital technology.

Spencer, J. (2015, Nov 3). What is the SAMR model and what does it look like in schools? [Video file]. Retrieved from https://youtube/SC5ARwUkVQg